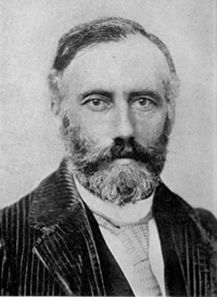 unquestionably true any statement of fact, principle, or theory which he

has not tested for himself. This does not exclude a reasonable reliance

upon testimony; but only that blind credulity which sometimes passes for

faith. As we understand the rule, it is that we should at all times keep a

clear and distinct boundary between what we know, and what we only accept

provisionally on the testimony of those who have had larger experience until we reach a point of view from which we can see its truth. We owe it to ourselves to enlarge the sphere of clear knowledge and to push back as far as possible the boundary of opinion and hypothesis.

The realm of knowledge has various departments. Our physical senses

furnish us one class of knowledge; our intellectual powers investigate

another field on mathematical lines; and yet another faculty enables us to

Karma. That we have other faculties, now largely latent, which when

developed will enable us to enter other fields of observation and

investigation, is beginning to be seen and appreciated. Among the subjects

truth concerning evolution, the out-breathing of the Great Breath, the

birth and development of a chain of globes, and of human life thereon,

some part of which has been imparted to us by those who claim to know, and

which is chiefly useful, perhaps, for the light which it throws on our surroundings, our destiny, and our duty.

outline, and not until our present physical earth is reached do we find

anything like detailed information. From the hints given out, however, and

reasoning according to the doctrine of correspondences, “as above, so

below,” we may plausibly infer many things in regard to other globes and

other systems; but such flights can hardly be taken with much profit or advantage until we become thoroughly familiar with the things that are revealed in regard to our immediate surroundings.

chain, it becomes apparent that some writers either did not have clear

views on the subject, or that confusion and even contradiction have

using the words chosen in a strictly consistent manner. The article

seems to me, open to this objection; and I ask leave of the Editor to contribute briefly to the work of making the subject more clear.

The planetary chain consists of seven companion globes, which for

chain. The course of evolution begins on globe A, and proceeds by regular

stages through globes B, C, D, E, etc. In the beginning, globe A was first

evolved, and life received a certain degree of development upon it; then

globe B came into existence, and the life-wave removed from globe A to B,

where it went forward another stage; then globe C was evolved and received

the life wave for a still further stage in its progress; and so on, until at the end of the first round globe G was evolved and furnished the field for the highest development attainable in that round.

from A to G - having been completed, the monads - the life wave - passed

through the chain. Without following out details, it is enough to say that

three such rounds have been completed, and the fourth round has commenced

its sweep and is still in progress; and that we now occupy globe D in this

fourth round. Three times the life-wave has passed from globe A to globe

G; and has now reached globe D in its fourth tour through the chain.  Now, leaving entirely out of sight for the present what has happened during the former three rounds, and on globes A, B, and C in this fourth round, let us consider what has happened on globe D since the life-wave reached it this fourth time; prefacing, however, the general statement that this globe will be exhausted and the life-wave be ready to pass from it to Globe E when seven root-races shall have finished their course here.

Each root-race is divided into seven sub-races; and each sub-race into seven family-races; and so on; these divisions and subdivisions following each the other, and not coexisting, except as an earlier race or division of a race may survive its time and overlap a subsequent race or division.  Since the life-wave reached globe D in this fourth round, four root-races have run their course upon it, and the fifth root-race has reached its fifth subdivision or sub-race, of which we are part. This fifth sub-race is said to be preparing in for transition or transformation into the sixth sub-race: it is not entirely clear whether we in the today belong to the seventh family-race of the fifth sub-race, or to the first family race of the sixth sub-race. It seems certain that we are near the transition point, unless there must be an intervening pralayic period.

course, and these must be followed by the sixth and seventh root-races

with their various subdivisions, before the life-wave passes from our

present globe D and begins its further evolution on globe E. From analogy

we may infer that seven great races, with their sub-races, etc., will be necessary to complete the work of that globe; and the same for globes F and G, before the fourth round shall be concluded and the life-wave be ready to pass to globe A for the beginning of the fifth round.

globe A to globe G, these tours being called rounds; the life-wave remains

on each globe after reaching it in each round, until it completes seven root races, divided into forty-nine sub-races and into three hundred and forty-three family-races.

It should be remembered that the flow of the life-wave is not continuous:

it has its ebb as well as its flood. There is a period of rest or pralaya

after the close of each round before another is commenced: a pralaya after

each globe in the round; similarly each race, sub-race, etc., is preceded and followed by its pralayic rest. The purpose of this paper is not to develop the entire scheme in all its completeness, even if that were possible; but to bring out as sharply as may be the general outlines, and especially to note the distinction between rounds and races, the seven rounds being seven circuits of the entire chain, while the seven root-races are seven life-waves (or seven repetitions of the same wave) which consecutively flow and ebb on each globe before leaving it. There are seven root-races on each globe; forty-nine root-races in each round; three hundred and forty-three root-races in the seven rounds which complete the life of the planetary chain.

In studying this subject, it must be borne in mind that, while numerous

passages in The Secret Doctrine refer to universal cosmogony and the

evolution of the solar system and of our planetary chain, still the bulk

fourth round only. It must also be remembered that the groups of monads

discussed in “Theosophical Gleanings” in Vol. VI of Lucifer are not to be

taken as identical with the seven root-races through which the monadic host passes on each globe in each round.

The foregoing outline of the course of evolution through the SEVEN

ETERNITIES of a maha-manvantara is mechanical and clumsy; it is only a

skeleton, which must be clothed upon with muscles and sinews by reading

between the lines before its true relations and proportions can be

understood. The following quotations from The Secret Doctrine will perhaps

throw a ray of light upon the connection of the globes of the chain:

be on different and superior planes. In short, as globes, they are in

COADUNITION but not IN CONSUBSTANTIALITY WITH OUR EARTH.

When “other worlds” are mentioned . . . the Occultist does not locate

nowhere in the space known to and conceived by the profane. They are, as

In a foot note to page 265 of ’s work on Reincarnation, (Lovell’s edition), the opinion is expressed that the figures (seven planets, seven rounds, seven races, etc.), are only symbols; even so: if they are symbols, they must no less be clearly apprehended before the truths symbolized can be grasped.