The Writings of C 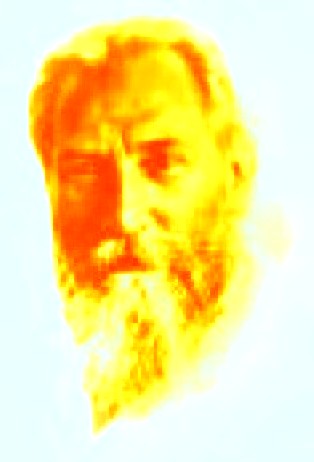 In connexion with the vision of which I gave an analysis on p47, questions have

thousands of miles can be instantly found by a trained clairvoyant. Apparently

this remains somewhat of a mystery to many, so I will endeavour to give an

explanation of the plan commonly adopted, though it is not easy to put it quite

plainly. A clear expression of super-physical facts cannot be achieved in

physical words, for the latter are always to some extent misleading even when

they seem most illuminative. Man's various forces and qualities, manifesting in

his bodies as vibrations, send out for each vehicle what may be called a

keynote. Take his astral body as an example.

From the number of different vibrations which are habitual to that astral body there emerges a sort of average tone, which we may call the keynote of this man on the astral plane. It is obviously conceivable that there may be a considerable number of ordinary men whose astral keynote is practically the same, so that this alone would not suffice to distinguish them with certainty. But there is a similar average tone for each man's mental body, for his causal body, and even for the etheric part of his physical body; and there have never yet been found two persons whose keynotes were identical at all these levels, so as to make exactly the same chord when struck simultaneously. Therefore the chord of each man is unique, and furnishes a means by which he can always be distinguished from the rest of the world.

Among millions of primitive savages there may possibly be cases where

the differences between them to be observed, but with any of the higher races

there is never the least difficulty, nor is there any risk of confusion. Whether

the man be sleeping or waking, living or dead, his chord remains the same, and

he can always be found by it. How can this be so, it may be asked, when he is

resting in the heaven-world, and has therefore no astral or etheric body to emit

the characteristic sound? So long as the causal body itself remains, it has

always attached to it its permanent atoms, one belonging to each of the planes,

and therefore, wherever he goes, the man in his causal body carries his chord

with him, for the single atom is quite sufficient to give out the distinctive

The trained seer, who is able to sense the chord, attunes his own vehicles for the moment exactly to it, and then by an effort of will sends forth its sound.

Wherever in the three worlds that man who is sought may be, this evokes an instantaneous response from him. If he be living in the physical body, it is quite possible that in that lower vehicle he may be conscious only of a slight shock, and may not in the least know what has caused it. But his causal body lights up instantly - leaps up like a great flame, and this response is at once visible to the seer, so that by that one action the man is found, and a magnetic line of communication is established. The seer can use that line as a kind of telescope, or if he prefers he can send his consciousness flashing along it with the speed of light, and see from the other end of it, as it were. The combination of sounds which will produce a man's chord is his true occult name; and it is in this sense that it has been said that when a man's true name is called he instantly replies, wherever he may be. Some vague tradition of this is probably at the back of the idea so widely spread among savage nations, that a man's real name is a part of him, and must be carefully concealed, because one who knows it has a certain power over him, and can work magic upon him.

Thus also it is said that the man's true name is changed at each initiation, since

progress by which he has, as it were, raised himself to a higher key, putting an

additional strain upon the strings of his instrument, and evoking from it far

grander music, so that thenceforward his chord must be sounded differently.

This name of the man must not be confused with the hidden name of the Augoeides, for that is the chord of the three principles of the Ego, produced by the vibrations of the âtmic, buddhic and mental atoms, and the Monad behind them. In order to avoid such confusion we must keep clearly in mind the distinction between two manifestations of the man at different levels. The correspondence between these two manifestations is so close that we may almost consider the lower as the repetition of the higher. The Ego is triple, consisting of âtmâ, buddhi, manas, three constituents each existing on its own plane - the âtmâ on the nirvânic, the buddhi on the buddhic, and the manas on the highest level of the mental.

This Ego inhabits a causal body, a vehicle built of the matter of the lowest of

the three planes to which he belongs. He then puts himself further down into

bodies. His chord in this lower manifestation is that which we have been

describing, and consists of his own note and those of the three lower vehicles.

Just as the Ego is triple, so is the Monad, and this also has its three constituents, each existing on its own plane; but in this case the three planes are the first, second and third of our system, and the nirvânic is the lowest of them instead of the highest. But on that nirvânic level it takes to itself a manifestation, and we call it the Monad in its âtmic vehicle, or sometimes the triple âtmâ; and this is for it what the causal body is for the Ego. Just as the Ego takes on three lower bodies (mental, astral, physical), the first of which (the mental) is on the lower part of his own plane, and the lowest (the physical) two planes below, so the Monad takes on three lower manifestations (which we commonly call âtmâ, buddhi, manas), the first of which is on the lower part of its plane, and the lowest two planes below that.

It must of course be understood that the chord cannot be accurately considered as sound in the sense in which we use that word on this plane. It has been suggested to me that an analogy which is in some respects better is that of the combination of lines in a spectrum. Each of the elements known to us is instantly recognisable by its spectrum, in whatever star it may appear, no matter how great the distance may be - so long as the lines are bright enough to be seen at all. But the chord of which we have been speaking is not actually either heard or seen; it is received by a complex perception which requires the practically simultaneous activity of the consciousness in the causal body and in all the lower vehicles. Even with regard to ordinary astral perception it is misleading (though practically unavoidable) to speak of 'hearing' and 'seeing'. These terms connote for us the idea of certain sense-organs which receive impressions of a well-defined type.

To see implies the possession of an eye, to hear implies the existence of an ear. But no such sense-organs are to be found on the astral plane. It is true that the

astral body is an exact counterpart of the physical, and that it consequently

shows eyes and ears, nose and mouth, hands and feet, just as the latter does.

counterparts of our physical feet, nor do we see and hear with the counterparts

of our physical eyes and ears. Each particle in an astral body is capable of

receiving a certain set of vibrations - those belonging to its own level, and

those only. If we divide all astral vibrations into seven sets, just like seven

octaves in music, each octave will correspond to a subplane, and only a particle

respond to the vibrations of that octave. So 'to be upon a certain subplane in

one's astral body which belong to that subplane, so that one can perceive the

matter and the inhabitants of that subplane only.

To have perfect vision upon the astral plane means to have developed sensitiveness in all particles of the astral body, so that all the subplanes are simultaneously visible. But even though a man has developed the particles of one subplane only, if those are fully developed he will have on that subplane a power of perception equivalent to all of our physical senses. If he perceives an object at all, he will in that one act of perception receive from it an impression which conveys all that we learn down here through those various channels which we call the senses; he will simultaneously see, hear, and feel it. The instantaneous perception which belongs to higher planes is still further removed from the clumsy and partial action of the physical senses. In order to see how the chord helps the clairvoyant to find any given person, it must also be understood that the vibrations which cause it are communicated by the man to any object which is for some time in close contact with him, and therefore permeated by his magnetism.

A lock of his hair, an article of clothing which he has worn, a letter which he

to perceive it. It can also be obtained very readily from a photograph, which

seems more curious, since the photograph need not have been in direct contact

with the person whom it represents. Even untrained clairvoyants, who have no

scientific knowledge of the subject, instinctively recognise the necessity of

bringing themselves en rapport with those whom they seek by means of some such objects.

In the case of the vision described last month the letter which led to the investigations was the link with the writer. It is not necessary for the seer to hold the letter in his hand while examining the case, or even to have it near him. Having once held the letter and sensed the chord, he is able to remember it and reproduce it, just as any one with a good memory might remember a face after seeing it once. Some such link as this is always necessary to find a person previously unknown. We had recently another case where a man had died somewhere in the Congo, but as no photograph of him was sent by the friend who wrote about him, it was necessary first to seek that friend (somewhere in

, I think) and make a contact in a roundabout way through him.

There are, however, other methods of finding people at a distance. One which is very effective requires higher development than that just described. A man who is able to raise his consciousness to the atomic level of the buddhic plane there

course among the rest with the person whom he seeks. He draws his consciousness up into this unity along his own line, and he has only to put himself out again along the line of that other person in order to find him. There are always various ways of exercising clairvoyance, and each student employs that which comes most naturally to him. If he has not fully studied his subject, he often thinks his own method the only one possible, but wider knowledge soon disabuses him of that idea. Search this site